Nearly a century after the foundations of quantum mechanics were laid down by pioneers like Niels Bohr, Werner Heisenberg and others, technological improvements are starting to enable coherent control of individual quantum systems, i.e., systems consisting of single atomic and sub-atomic particles. In just five years, applied research and spin-out activities have exploded. Our take on this recent boom is optimistic, but cautious. The technological challenges will be solved in due time, but the required investments will be huge.

Unknown to many, quantum phenomena are already utilized in many technologies today: for example, the semiconductors inside virtually all our everyday gadgets and whose theory of solid-state physics relies heavily on quantum mechanics. By understanding the rules of the sub-atomic world, the world went through its first quantum revolution more than half a decade ago.

The second quantum revolution is now taking shape. Different this time is our budding skill to control and engineer isolated parts of the microcosm surrounding us. Specifically, we are now able to control systems of single electrons, photons and other sub-atomic particles. We are also able to measure e.g. spin and polarization of these systems, a skill that is critical to the applicability of quantum technology.

While the final outcome of the second quantum revolution is yet to be seen, its impact is expected to be huge. We foresee a wave of technological ventures bringing us novel platforms for sensing, intercept-proof communication, molecular simulation, and at the core: quantum computation. New sensing capabilities and by-nature secure communication may come to redefine healthcare and telecom industries. And research and development work related to fields like biotech, nanotech and advanced materials is likely to benefit from increased computational resources in simulating the behaviour of atoms and molecules, ultimately affecting people and planet to a great extent.

THE GAIN OF MOMENTUM

The second quantum revolution is hitting us fast. On the European level, the 2018 launch of the Quantum Flagship research initiative has helped the orchestration of the European research in quantum technology and kick-started its industrialization. Similarly, in Sweden, the Wallenberg Centre for Quantum Technology (WACQT) coordinates joint progression between both academic and industrial partners.

From 2015 the number of patents filed at the European Patent Office in the category ‘Quantum computing’ started to increase rapidly and has by today reached approximately ten times the levels of 2010. While the number of patents does not guarantee an increase of innovation in the field, its steep growth indicates increasing interest and a joint strategic positioning. This, together with the increase of peer-reviewed academic papers accepted in notable scientific journals (here the journals of American Physical Society are used as a proxy) indicates that the field – put in physics parlance – has been promoted to an excited state.

This heavy propulsion is also observed in invested private capital, as start-up companies enter the sector. Pitchbook data indicates that capital streams started to flow in the North American markets by the mid-2010s but the largest recent increase is in the Asia-Pacific region that in 2020 stood for over half of the publicly announced invested capital. Furthermore, in Europe, coinciding with the joint strategic efforts within quantum tech, investments are increasing since 2018. Merely a year into the new decade, it seems like this is the decade where the second quantum revolution will start to take form.

Even with recent developments, scaling quantum technologies from the laboratory into commercial application will prove scientifically and technologically challenging. Building quantum technologies is a complex challenge in itself since quantum systems are inherently sensitive to disturbances from the surrounding environment (caused by e.g. collisions with other atoms or stray fields from electronic equipment in its vicinity). Take for instance quantum computers: to implement a useful quantum algorithm (e.g. Shor’s algorithm for factorisation) that excels at a classical computation, orders of magnitude more qubits than the 50-ish that today’s quantum computers hold would be required just for the error correction of noise. We are nowhere close and so far, there is no proven approach to scale the number of qubits, regardless of the different underlying qubit constructs (e.g. superconductors, photons, ion traps, etc). Furthermore, the control of quantum technologies requires advanced I/O-interfaces built on lasers and microwaves, all with inherent integration and scaling difficulties.

In addition, there are several strategical challenges. The widespread hype around quantum technology (especially computation and communication) has driven the expectations of what can be achieved in the short term to levels far from what researchers think is possible. Such dissonances could very well feed rapid up- and down-swings of capital flow (i.e. due to the inflation and burst of a possible quantum tech bubble), which adds to the financial risk of the oftentimes explorative and capital intensive quantum projects. Moreover, because the scientific community is far from reaching a consensus regarding what construct of qubit is likely to scale (if any), investment decisions that lock in certain constructs could be problematic from a risk/reward perspective.

These challenges encourage us to develop an investment hypothesis in quantum technology not much unlike how one would engage in strategy planning in an uncertain technological landscape. The aim is to identify what within quantum tech is reasonable to invest in today, given the uncertainty of the future direction of the field.

Our approach stems from the works of Amy Webb, professor of strategic foresight at New York University’s Stern School of Business. In her strategy cone she divides future planning into three chunks: tactics, strategy and vision – ruled by the decay of certainty as time progresses. In our adaptation of the strategy cone, we envision three leaps of quantum technology (with escalating complexity): enabling components and niche technologies, integration of systems and distribution of quantum technology. Our walkthrough of the second quantum revolution best begins at the far-end of the cone, and we use the long-term vision and mid-term strategy to guide our short-term investment tactics. 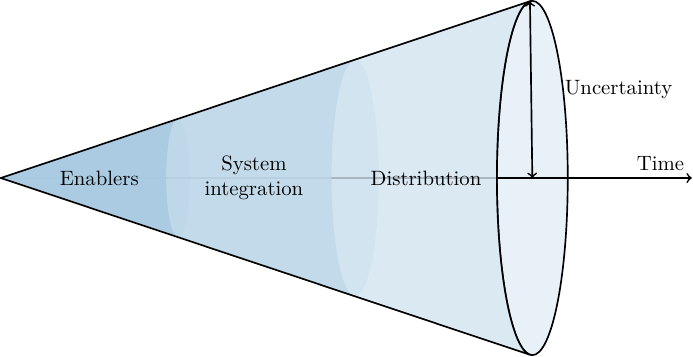 Our long-term vision reaches past the point where quantum technology is distributed and well-integrated in our society. Technology in this era will be the aqueducts of quantum that facilitate high-level usage of quantum systems (even combination of modalities) without any prior knowledge of quantum theory.

To support such a vision, we believe it is important that quantum technology is made in a modular fashion and that future implementation build on open standards much like today’s conventional technology. Abstraction levels between classical and quantum are necessary, as are infrastructure backbones and back-ends that enable seamless quantum communication and computation.

For this to be possible, the high marginal costs (economic and knowledge-wise) of developing quantum technology must decrease significantly. Hence, quantum tech foundries and AI (and perhaps quantum computation)-aided design of e.g. qubits will be key enablers. Additionally, quantum components need to fit without large implementation overheads and apply a horizontal scaling.

Before societal integration of quantum tech is possible, the system-level integration must happen. That is, the joining of quantum components and sub-systems to something more resembling a programmable computer or functioning communication interface. This is easier said than done.

To fuel optimism, researchers are aiming for a steppingstone in quantum tech industrialisation where error will and should be embraced: the Noise Intermediate Scale Quantum (NISQ) era. Even though advances are impressive, to us, technological development in this era can be compared to the early days of fixed-program computers, thus not ready for system integration towards the distributed vision. To get past NISQ, the quantum computation architectures of today may have to be completely rethought.

NISQ aside, we believe that the wide-scale integration of quantum technology will be driven by collaborations like WACQT and Quantum Flagship, together with large companies (Google, IBM, Ericsson, Huawei, etc). These parties have strategical interests in both defining quantum systems as well as binding the integration to their geographies of interest, together with a financial strength and time-horizon that allows them to do so.

Although quantum computation is getting most attention and investments today, we expect the system integration to crystalize as a function of complexity; starting in fields like sensing, to then continue in communication, simulation and computation. Even though wide integration will likely be led by large public and private R&D initiatives, we hypothesise that enabling components and niche technologies (perhaps even narrowly verticalised computers) will surface via research-spin outs in the form of start-ups.

If we invest in quantum computing, it will likely be in enabling components that are necessary for system integration. We are actively looking for scalable (in production and integration) constructs of the qubit, I/O technologies (hardware and software) that offer sensible control and readout of qubits and technologies that enable amplification of signals from the quantum world into the classical. Software abstraction layers are also of interest, although we expect the open source path to be dominant. Among the more advanced technologies which may act as enablers we find two-dimensional materials which represent a solid-state platform for qubit constructs, and integrated photonics as a viable technology to interconnect quantum systems.

Beyond enabling components for computing, we believe that the next coming years will produce interesting opportunities surrounding niche quantum technologies that do not require massively interconnected and programmable quantum systems, but rather build on few quantum components and have a more straightforward interface with conventional technologies. It could be technologies like extreme ultraviolet light-sources for medical imaging or sensors for novel radars utilized in the automotive and defence industries. Sensing and communication are furthermore part of the Swedish legacy, why we believe Sweden to be an especially suited seeding ground for the next generation of such technologies.

The second quantum revolution is not only about quantum computing. Rather, the novel computation technology will be one component to the revolution, wrapped in a new generation of sensing, communication and simulation technologies that bring us a new era of informatics.

With the Nordic quantum technology sector starting to bud, we find it a good time to move from a reactive to a proactive monitoring of the field. But as an investor with the need to balance risk and reward – and due to a lack of scientific consensus regarding scalable architectures of the quantum computer – we are not yet ready to invest in system-integration projects aiming at producing the Apple of quantum. Instead, we will search for enabling components that scale in production and integration. And beyond computation, we believe quantum technologies will crystalize as a function of complexity, why we foresee more immediate quantum technology applications and opportunities within, e.g., quantum sensing towards medical imaging and radar applications.